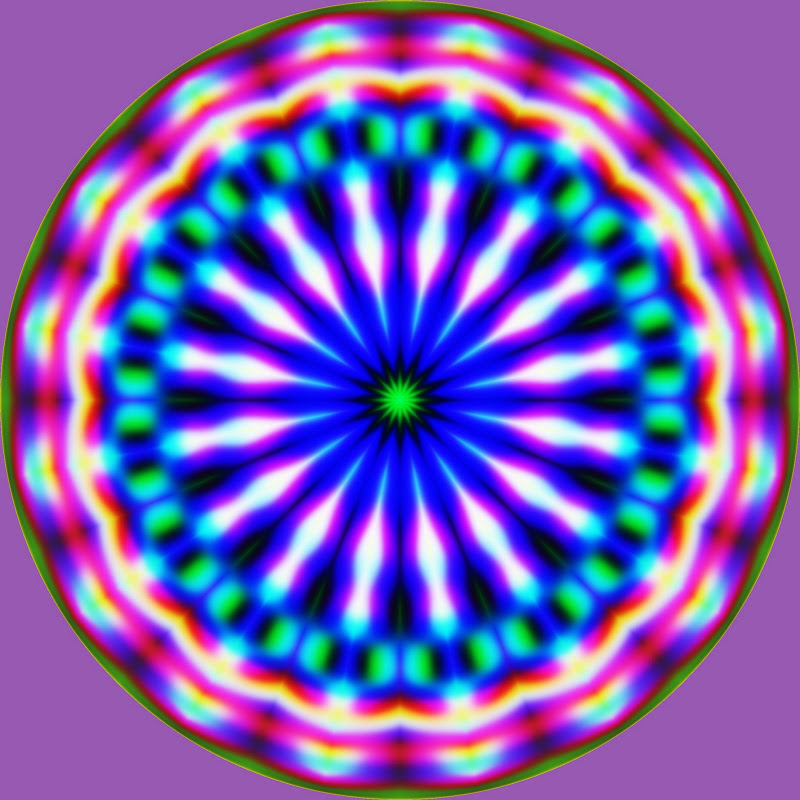 "Have you ever seen God?"
-a mandala. A symmetrical angel. 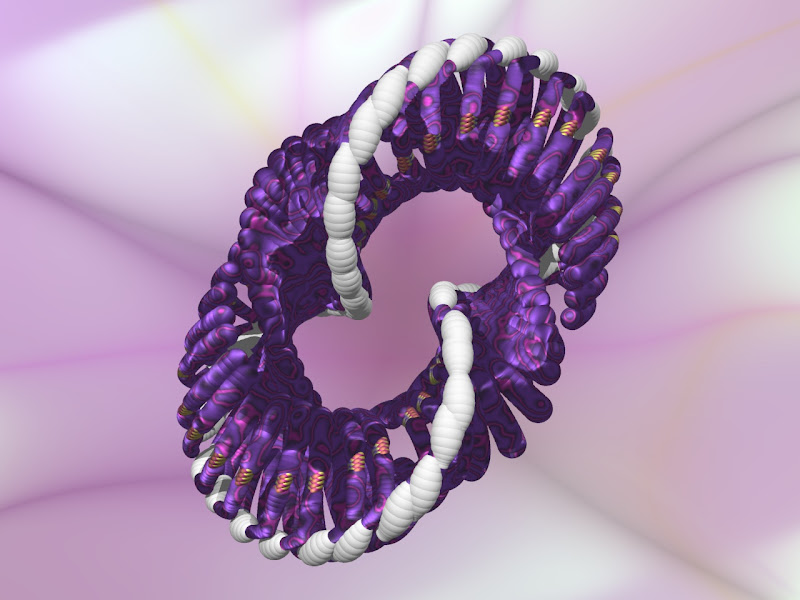 I'm out here kickin' with the band.
I am no longer a solitary man.
Every day my time runs out.
Lived like a fool, that's what I was about, oh

The Ramones, "I believe in miracles". --Song:
Email ThisBlogThis!Share to TwitterShare to FacebookShare to Pinterest
Posted by runnerfrog at 12:08:00 am Etiquetas [Labels]: 3D, GA, Lyrics The Ramones, Song The Ramones 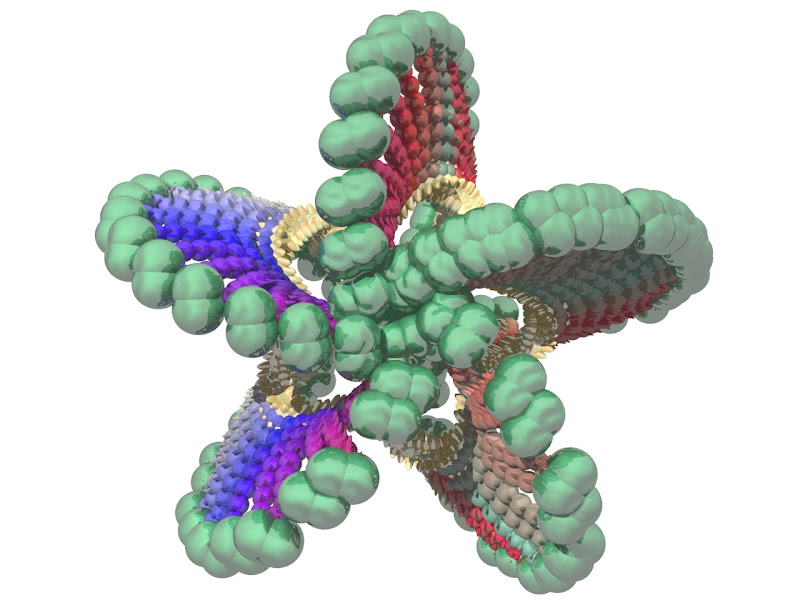 Show me the order of the world,
the hard-edge light of this-is-so
prior to all experience
and common to both world and thought,
no model, but the truth itself.

Language is not a perfect game,
and if it were, how could we play?
The world's more than the sum of things
like moon, sky, centre, body, bed,
as all the singing masters know.

Picture two lovers side by side
who sleep and dream and wake to hold
the real and imagined world
body by body, word by word
in the wild halo of their thought. 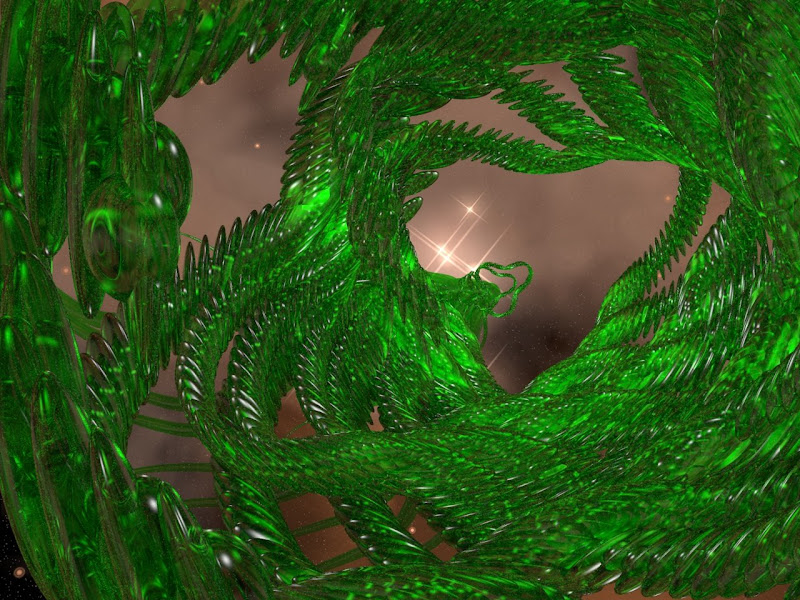 O never harm the dreaming world,
the world of green, the world of leaves,
but let its million palms unfold
the adoration of the trees.

It is a love in darkness wrought
obedient to the unseen sun,
longer than memory, a thought
deeper than the graves of time.

The turning spindles of the cells
weave a slow forest over space,
the dance of love, creation,
out of time moves not a leaf,
and out of summer, not a shade.

Creature of the Light #19 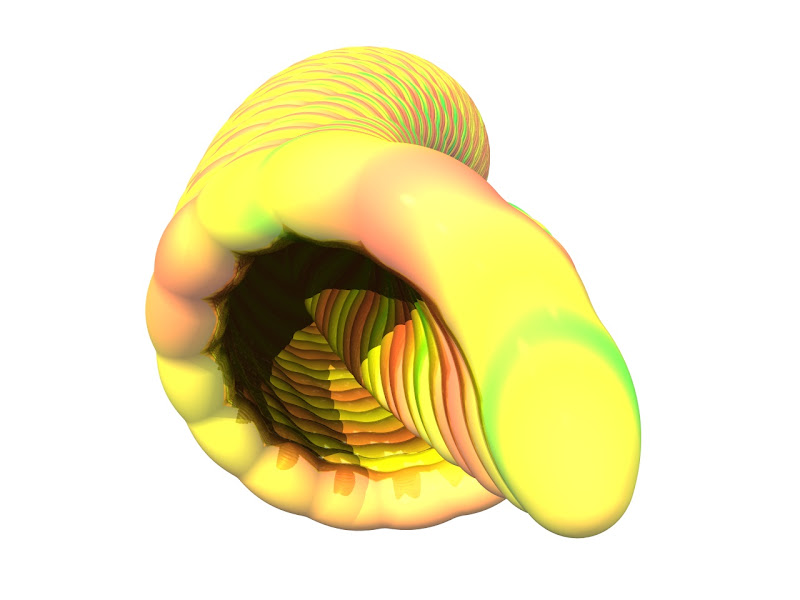 To the passionate lover,
whose sighs come back to him
on every breeze,
all the world is like a murmuring sea-shell. 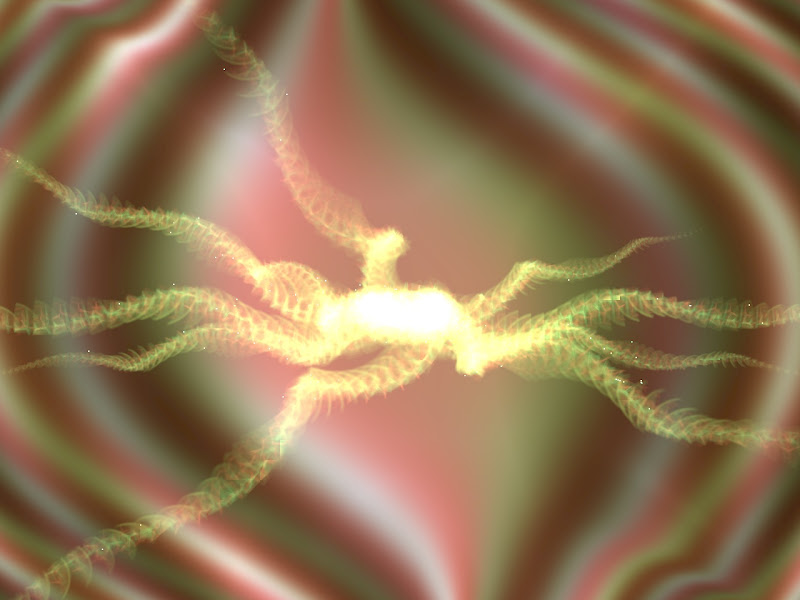 I don’t remember the word I wished to say.
The blind swallow returns to the hall of shadow,
on shorn wings, with the translucent ones to play.
The song of night is sung without memory, though.

No birds. No blossoms on the dried flowers.
The manes of night’s horses are translucent.
An empty boat drifts on the naked river.
Lost among grasshoppers the word’s quiescent.

It swells slowly like a shrine, or a canvas sheet,
hurling itself down, mad, like Antigone,
or falls, now, a dead swallow at our feet.
with a twig of greenness, and a Stygian sympathy.

O, to bring back the diffidence of the intuitive caress,
and the full delight of recognition.
I am so fearful of the sobs of The Muses,
the mist, the bell-sounds, perdition.

Mortal creatures can love and recognise: sound may
pour out, for them, through their fingers, and overflow:
I don’t remember the word I wished to say,
and a fleshless thought returns to the house of shadow.

The translucent one speaks in another guise,
always the swallow, dear one, Antigone….
on the lips the burning of black ice,
and Stygian sounds in the memory.

Creature of the Light #18 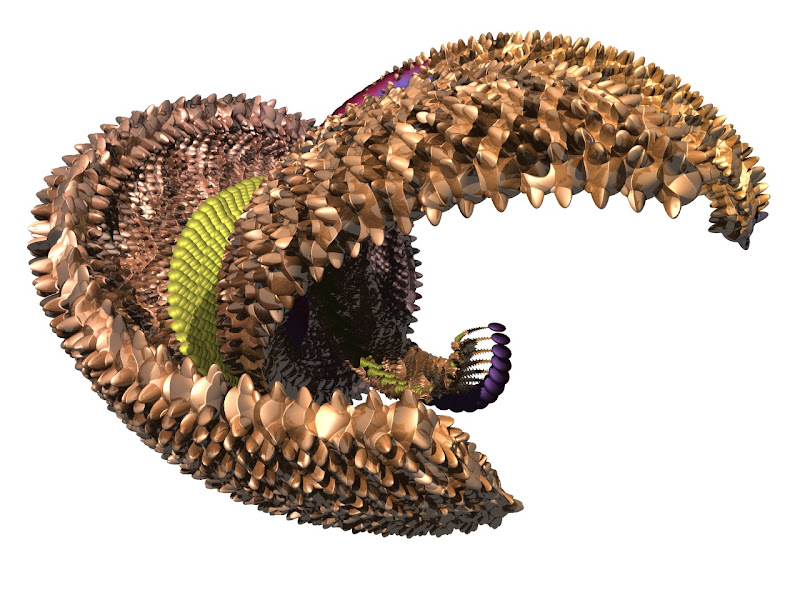 If this is peace, this dead and leaden thing,
Then better far the hateful fret, the sting.
Better the wound forever seeking balm
Than this gray calm!

Is this pain's surcease? Better far the ache,
The long-drawn dreary day, the night's white wake,
Better the choking sigh, the sobbing breath
Than passion's death! 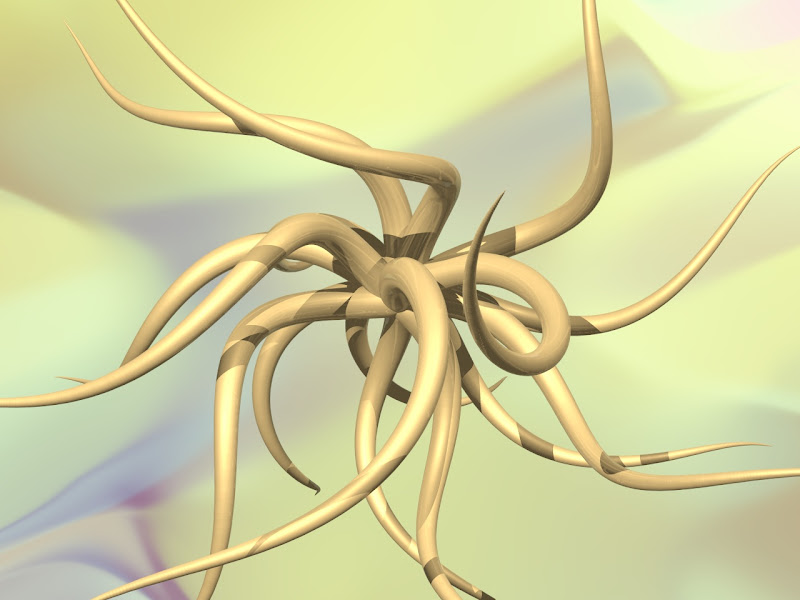 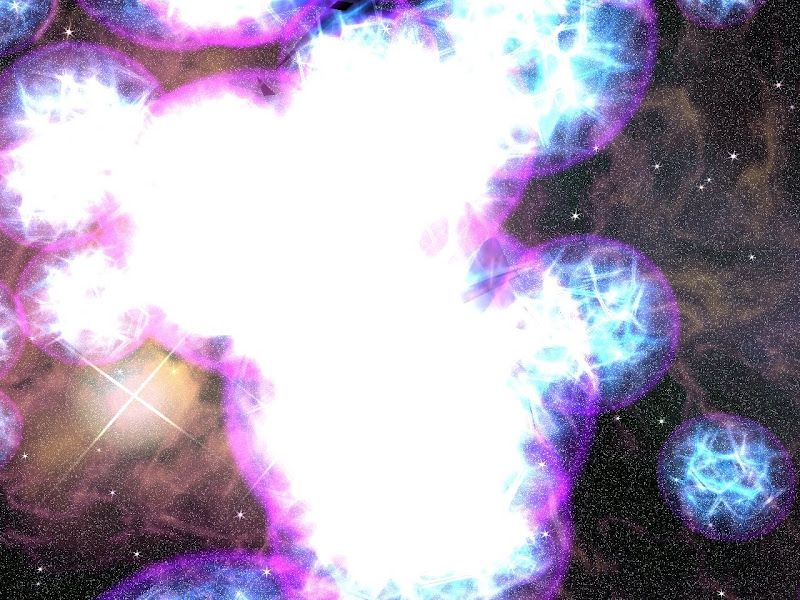 [...]
In the clear glass of a dream, I have glimpsed
the Heaven and Hell that lie in wait for us:
when Judgement Day sounds in the last trumpets
and planet and millennium both
disintegrate, and all at once, O Time,
all your ephemeral pyramids cease to be,
the colors and the lines that trace the past
will in the semi-darkness form a face,
a sleeping face, faithful, still, unchangeable
(the face of the loved one, or, perhaps, your own)
and the sheer contemplation of that face --
never-changing, whole, beyond corruption --
will be, for the rejected, an Inferno,
and, for the elected, Paradise.

The most complex formula I've worked with until now; even had to use macros. Promised to myself never do it again. It looks better full size. 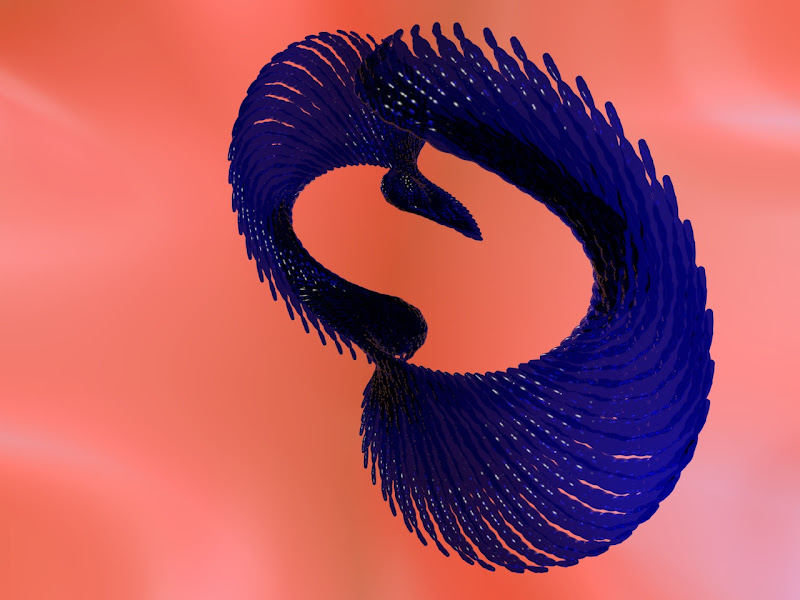 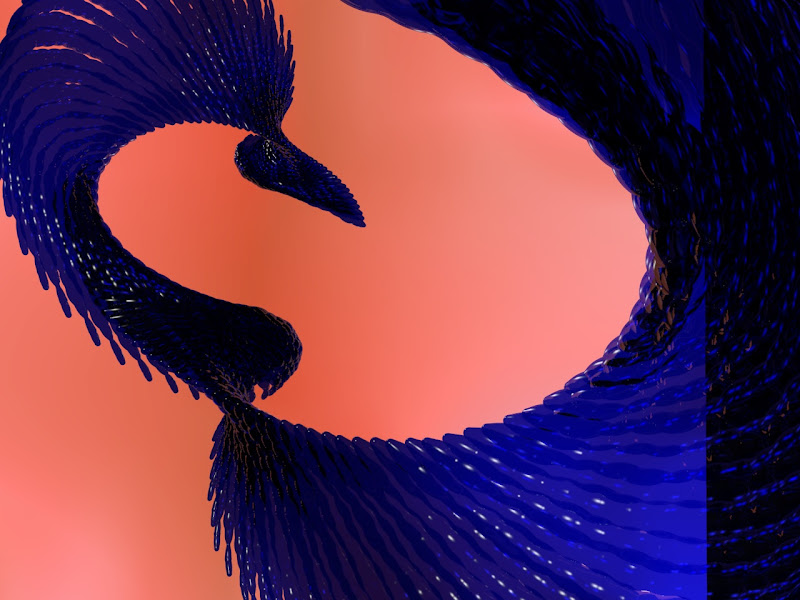 Through blue glass beams of light will pass
through broken bits of childhood's stained glass
through the blue of a coat of arms
through eternity, sick with her secrets,
you will know her healing blue light
as a ripple of cool breeze
the freshness of early violets
being sold already on wet streets
and your stitches will be of deep blue silk
sewn with an ever darkening thread –
and only a small blue bouquet will remain –
like snowflakes melting by the second. 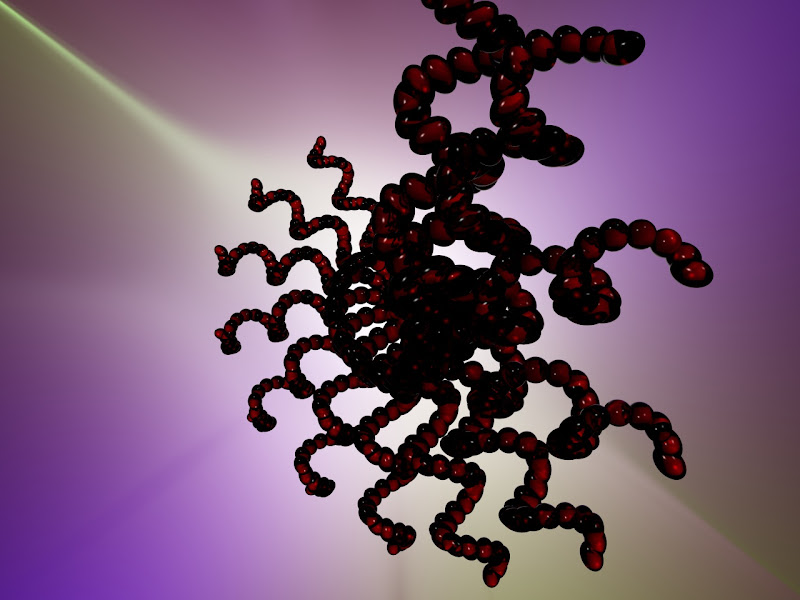 Leave this chanting and singing and telling of beads!
Whom dost thou worship in this lonely dark corner of a temple with doors all shut?
Open thine eyes and see thy God is not before thee!

He is there where the tiller is tilling the hard ground
and where the pathmaker is breaking stones.
He is with them in sun and in shower,
and his garment is covered with dust.
Put off thy holy mantle and even like him come down on the dusty soil!

Deliverance?
Where is this deliverance to be found?
Our master himself has joyfully taken upon him the bonds of creation;
he is bound with us all for ever.

Come out of thy meditations and leave aside thy flowers and incense!
What harm is there if thy clothes become tattered and stained?
Meet him and stand by him in toil and in sweat of thy brow.

For six weeks I was trying to find any abstract vision that could barely match a very concrete poem like "Dust" by Rupert Brooke is, to no avail. The concept was a lightning and some glowing particles. Modelling by hand is a piece of cake, but try with formulas and tell me. I was trying until I got simply tired and just accepted something resembling a lightning and something resembling a twirl of fireflies, both to be one enough and final acceptable thing. But right then, when I decided that this image was enough to go with "Dust", I reminded a song too: On the year I was born, Fleetwood Mac released a rock version of this outstanding poem by Rupert Brook (who is one of my favourite poets), it's a quite unknown song now (called "Dust" too), so much forgotten that I was oblivious about it for over a decade, but working on this image made me remember it; most probably because of the glowing things. The image is abstract and not really evocative of anything, but it made me remember the song. The poem and the song player are down below. It is the last song of the last album of the best reputated line-up of the band. The poem is far better, though, since the lyrics only focus on the darkest part of the poem.
Strange paths walks the mind. 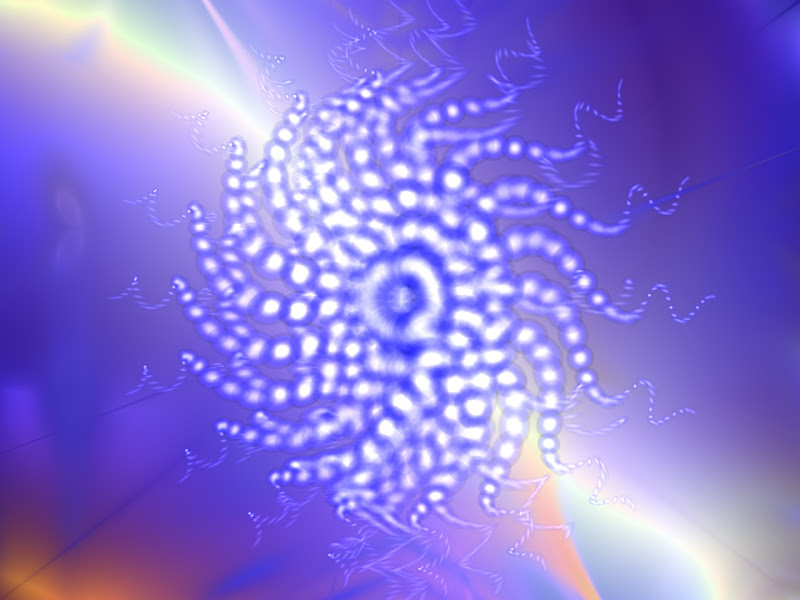 I decisively prefer the blue glow, but this other one is a more firefly-like... I guess. 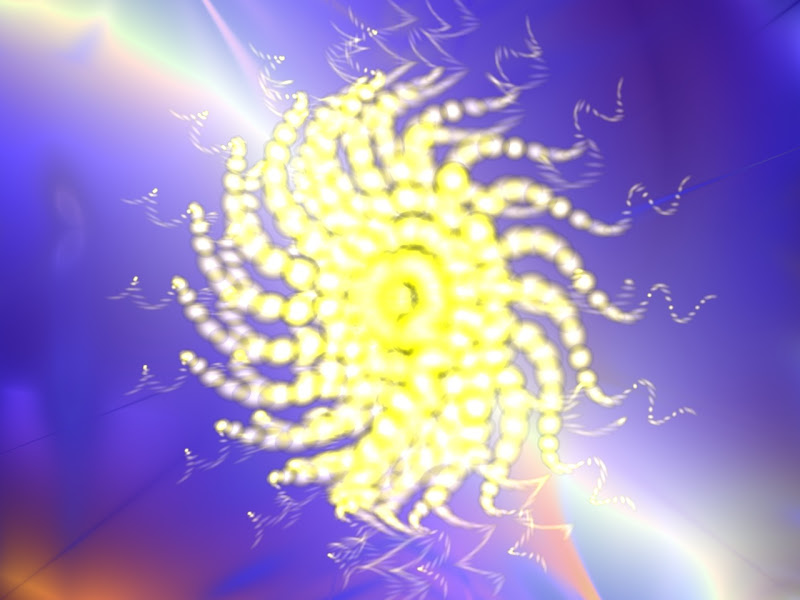 When the white flame in us is gone,
And we that lost the world's delight
Stiffen in darkness, left alone
To crumble in our separate night;

When your swift hair is quiet in death,
And through the lips corruption thrust
Has stilled the labour of my breath —
When we are dust, when we are dust! —

Not dead, not undesirous yet,
Still sentient, still unsatisfied,
We'll ride the air, and shine, and flit,
Around the places where we died,

And dance as dust before the sun,
And light of foot, and unconfined,
Hurry from road to road, and run
About the errands of the wind.

And every mote, on earth or air,
Will speed and gleam, down later days,
And like a secret pilgrim fare
By eager and invisible ways,

Nor ever rest, nor ever lie,
Till, beyond thinking, out of view,
One mote of all the dust that's I
Shall meet one atom that was you.

Then in some garden hushed from wind,
Warm in a sunset's afterglow,
The lovers in the flowers will find
A sweet and strange unquiet grow

Upon the peace; and, past desiring,
So high a beauty in the air,
And such a light, and such a quiring,
And such a radiant ecstasy there,

They'll know not if it's fire, or dew,
Or out of earth, or in the height,
Singing, or flame, or scent, or hue,
Or two that pass, in light, to light,

Out of the garden, higher, higher. . .
But in that instant they shall learn
The shattering ecstasy of our fire,
And the weak passionless hearts will burn

And faint in that amazing glow,
Until the darkness close above;
And they will know — poor fools, they'll know! —
One moment, what it is to love.